One of my favorite way of spending spare-time (the little I scratch together), is involved with photography.

Besides looking at pictures, reading about the exciting world of photography I started taking pictures myself.
Like everyone else I started taking snapshots with common film cameras, most were the cheap focus-free type. In the last few years however I got more and more excited about real cameras (mostly SLR's), and I managed to gather a few:


Some pictures from the airshow this weekend.

Yes, I know I should have cleaned my lens.. Seems I didn't get to it after the seaside trip the previous week.. :(


The track from Oravita to Anina is the oldest mountain track built in Romania. It dates from ~1855-1863 and over a length of 34km you cross 10 bridges, 14 tunnels all with 340m height difference.

The track has sections with up to 20‰ climbings, and curves with a 114m radius (opposed to regular curves of 150m radius). That means you need to use special cars to run along the track.

The ride is a regular train ride, it's not special for tourists. During the week the train does 2 trips daily, on weekends only one (usually stuffed with tourists). There are 2 cars (as you can probably see in the pictures) with wooden benches, and wood-based heating in winter. There's a wooden stove in each car which provides heat for the whole car.

There is talk to close the track, as maintenance is pretty costly. It would really be a shame, as it's yet another great tourism attraction which isn't properly harvested. One could really promote it, have it always full and generate some income to support the maintenance for the track and train. But at the current price (about 10.4 LEI ~ 3 USD) for a 2-way trip, there is surely no reason to keep it open.


Some pictures I snapped on the road through Romania...

First time in London, and I can surely say - we need to go there again. It's a great city..

Lately I've been too busy to have time for film shooting (all the time involved to get films, get them developed, fotos, etc), so I turned to the digital side ;).
Look below for my film cameras.

That's the first digital camera I used a while back. It's a 2.1 MPixel cam, nothing fancy, was pretty good at its time. It still works, yet I don't use it any more. 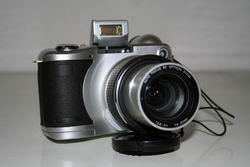 The PhotoSmart 850 was the first serious digital cam I had. It works very nicely and shoots some awsome pictures with the default settings. It even allows you to enter more creative shooting modes (like aperture select or shutter priority). The integrated flash is pretty strong, and it works OK most of the times.
I really recommend this camera to anyone. It's pretty cheap these days on ebay (around 100-120 EUR), and you get some good optics and 4 MPixels for that. Did I mention the lens is only 2.8-3.1? And it's 8x optical (7.6-61mm), a beauty. 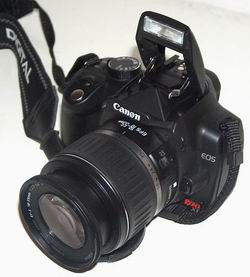 Yes I know it costs a lot of money, but I got myself one of these, and I must say I don't regret one bit. I've read reviews over reviews all over the net, but when I got it and started shooting with it I still was impressed.
When you switch it on it feels just like a SLR, nothing happens ;) No lenses turned on, no chips initializing, nothing, it's ready to shoot.
I absolutely love that whatever I do with it (connect it to the PC, look at pictures, set up stuff), no matter where in a menu I am, when I click the shutter it takes the picture almost instantly. Did I mention I like it a lot? So much I'll keep lots of info in a blog here ;) 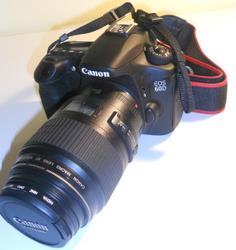 Recently a friend of mine started looking for a DSLR, and he was looking for the same class as my old 350D. Long story short, I ended up selling him my camera, and getting a fresh new upgrade. I think the reviews out there on the 60D don't do it justice, it's really great. The 350D was fun to use, but the 60D is so much more. After a couple days of using it lightly, I'm still getting used to the upgraded controls, and still a bit overwhelmed by all the options available (reminds me when I got the 350D.. 5 years ago).. 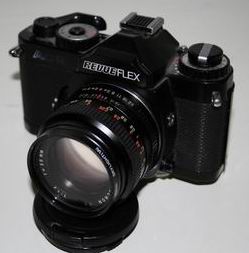 The first SLR I got is a Revue Flex AC2. It's a japanese SLR made sometimes back in the 80's. It might be a bit hard to use for newbies (I know I had a hard time figuring out what to do), because it's mostly manual. Aperture is manual, focus is, and even exposure can be set manually (1/1000 to bulb).
I very much like the f=50mm, 1:1,4 lens I have on it, because it's very fast and allows shooting in very dark places. The camera also came with an external flash (hot-shoe type), but I didn't figure shooting with it back then, and nowadays I don't use it very much anymore.
Especially since I got the EOS 350D, which is my favorite nowadays ;) 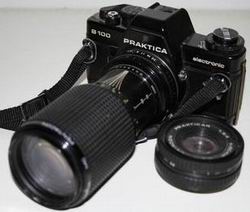 Next I came across this nice SLR at a local garage sale. Actually I only bought it for the 70-210 lens. The plan was to fit the lens on the Revue, unfortunately it didn't fit. It was then I learned that there are quite a few bajonett standards out there, and that most aren't compatible. The camera is pretty nice, although there is something wrong with the AE metering. Because it has no manual exposure control it's basicly busted. Maybe one day I'll get it repaired, although after I've seen todays prices on SLR's on ebay I probably won't.
I have another lens on the Practica: a small f=50mm, 1:2.4 lens. 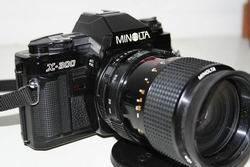 The last film SLR I bought so far is a very nice Minolta X-300. It's basicly not very different from the other two, works very nice too. I got a 1:3.5 35-70 lens on it, that works as a macro too. The macro is only up to 1:4, but it's ok for what I used it so far. I only shot a couple of rolls with it, and now that I got a nice DSLR, it'll probably stay on the shelv mostly.